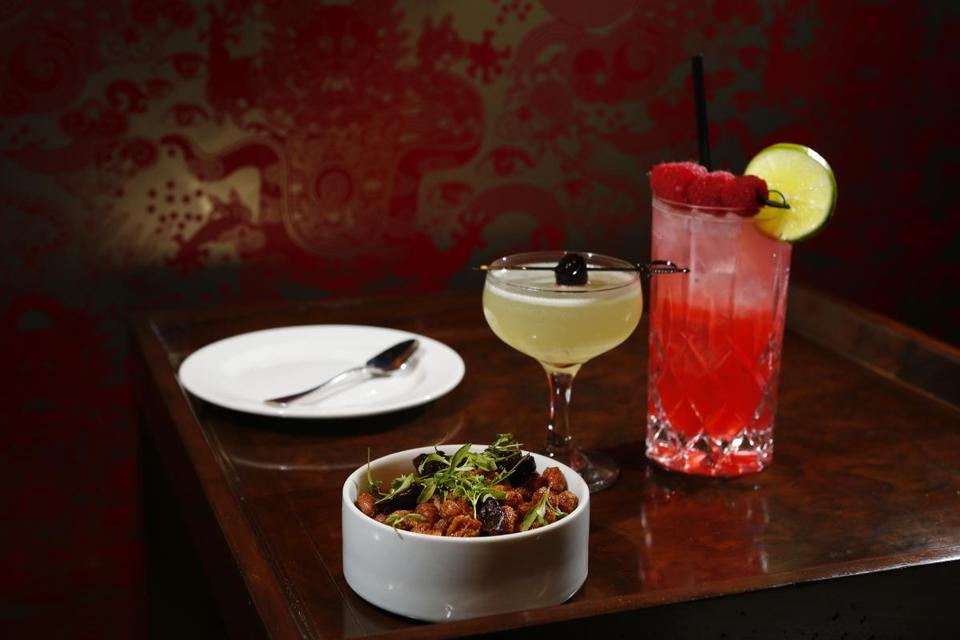 At Wink & Nod, Last Word (left) and Ivana are the drinks accompanying the spiced bar nuts.

Boston’s hottest restaurants, it’s party time circa 1979. Nubs of pork belly and showy charcuterie platters have been supplanted by dinner-party snacks of yesteryear: onion dip, bar nuts, olives, relishes. It won’t be long before someone presents them in Tupperware.

On the menu at Alden & Harlow — Harvard Square’s hangout du jour — chef Michael Scelfo offers onion dip and a humble bowl of smoked cashews. Around the corner at the Sinclair, chef Matt Cunningham concocts a pimento-and-cheese-stuffed-olive that Granny would adore. Kenmore Square barflies can get a simple relish tray at Audubon or onion dip at Eastern Standard. And chefs Samuel Monsour and Mark O’Leary quit work at Downtown Crossing gastropub JM Curley to run the Future of Junk Food, a pop-up series where people clamor for dishes unseen since the Carter administration, including fried-chicken TV dinners.

Many chefs have been accused of valuing gimmicky experimentation over good, old-fashioned hospitality — most recently chronicled by GQ’s Alan Richman in his article “The Rise of Egotarian Cuisine.” But at Boston’s top restaurants, chefs’ culinary egos were developed in childhood, and their food reflects that purity.

State Park chef Barry Maiden has beer nuts (served in an ashtray, no less) on his menu. “I want to make food that I want to eat, that I ate as a kid. If I don’t want to eat it myself, why would I make it? I’m just thinking about what’s going to taste good,” Maiden says.

This isn’t the same faux nostalgia marketing of the early 2000s, when it was impossible to find a menu without mac and cheese fancied up with lobster or tater tots festooned with truffles. Few diners grew up eating such things, after all, and neither did today’s chefs, for whom self-expression is synonymous with hospitality. 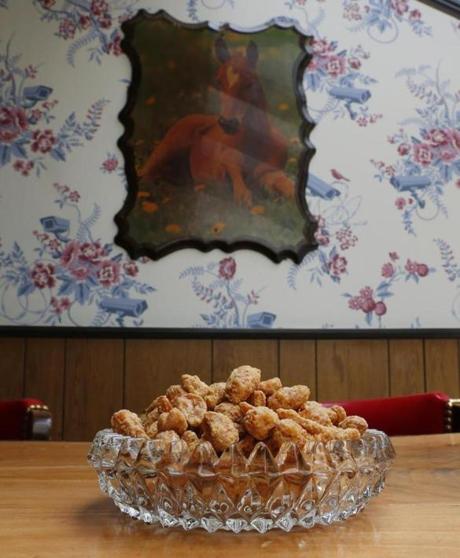 “I want my restaurant to feel like home,” says Alden & Harlow’s Scelfo. “As a kid, I had no shame: My favorite snack was onion soup mix, sour cream, and potato chips. That was the epitome of what onion dip was in my mind. I wanted to take that next step.”

Scelfo’s evolved version includes garlic aioli, buttermilk yogurt, grilled onions, scallions, and chives. It’s an elevated recipe, but the effect remains. “Candidly, I know customers want food that chefs personally care about. That’s what people taste — if it has a little bit of heart behind it,” he says.

“Chefs are finally getting to the point where they’re simply cooking stuff they love,” says Audubon’s Suzi Maitland, whose relish dish with kumquat jam, marinated olives, spicy pickled cauliflower, and sweet pickled radishes was inspired by family holidays. “This is stuff we grew up with. We’re from that era: the 1970s and 1980s.”

Back then American food reigned supreme, and a new generation of chef is transforming those childhood memories into forward-thinking and delicious meals — minus the additives and Wonder Bread.

“Chefs are finally doing what we haven’t seen much of lately: cooking American cuisine,” says Monsour. “For the last 10 years, when someone asked me what food I cooked, I’d say American, and it almost seemed boring. But ours is a pretty amazing bounty of food, if done well.”

“People have been trying so hard to cook new things, but a lot of dishes are classics for a reason. Why not revisit them?” asks Sinclair’s Cunningham, whose cheese-stuffed olives sometimes share menu space alongside deviled eggs.

Will Gilson’s Puritan & Company serves a crudite platter that would make a proper hostess proud, with baby radishes, asparagus, sugar snap peas, turnips, and carrots with onion dip, plus a pumpernickel crumble that resembles soil. (Mom might not have had time for that touch.) He wants his restaurant to be “the best cocktail party ever. I want people to feel like they’re at a cool cocktail club from the 1960s. Most of my menu is a throwback,” he says. 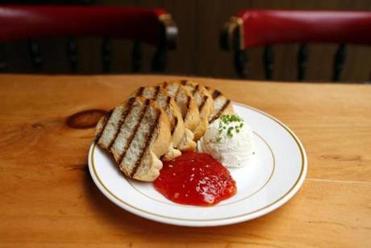 At perpetually packed brasserie Eastern Standard, manager Deena Marlette says onion dip is the most popular snack. “Bar programs have become more serious. Guests don’t want to spend time trying to figure out what to pair a cocktail with, when they could have something simple,” she says.

“What could be better than sitting at the bar and eating onion dip and potato chips for $5?” asks John Fitzgerald, co-owner of Bostonia Public House. There, the classic dip, inspired by a beloved family party recipe, is a bestseller. “Everybody knows it. Everybody loves it. People want to know what they’re eating,” he says.

At South End speakeasy Wink & Nod, which sells a $100 gin cocktail, one of the most popular dishes is a $6 bowl of bar nuts — with candied garlic, cilantro, and nuoc cham. “Comfort food originated right here in America. We just bump up the quality,” says co-chef Philip Kruta, whose Whisk culinary team runs the kitchen. “We started the idea with something classic that people recognize. Once you call a dish ‘bar nuts,’ you can be as creative as you want.”

The realization of a true grown-up.

About the Author: Bostonia